Liz Tucker is a writer of fiction and poetry.  Her short stories can be found in Transfer Magazine and Tahoe Blues, an anthology published by Bona Fide Books. Her short story Apartment 14B was chosen by The Whistling 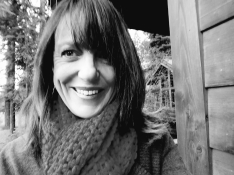 Fire as the introduction story for its themed issue on Truth in May 2012. Twice, Liz has been a finalist in Glimmer Train’s Short Story Award for New Writers, one for her piece The Misunderstood Curse of Diego Villarreal and then more recently for her story Sunday Night Movies.  She was also a runner-up in the WOW! Women on Writing Spring 2011 Flash Fiction contest for her piece Smoke Rings.  Her poetry can be found in Red River Review, Moonshine Ink, The Aroostook Review, and SNReview.   Liz is currently working on her novel Fault Lines, a novel-in-stories about a girl who must deal in the aftermath of her father’s suicide following her service in World War II. The novel, set amongst Northern California’s fault-prone landscape, exposes the harsh world of survivor guilt and the unspoken notions of blame and fault this one unforgettable family endures long after the father’s death.  Chapter One, Relief Patterns, June 1952, was published by The Bangalore Review in October 2017. Chapter Two, Panoramic Highway, November 1954, was recently awarded an Honorable Mention in the 2017 JuxtaProse Fiction Prize and published in the Summer 2018 edition of the JuxtaProse Literary Journal.

Liz is a sixth-generation Californian living in the Sierra Nevada mountains with her husband and two children.  When she is not writing or sawing away at her cello or plucking her upright bass with her Gypsy-Americana band, Calling Ophelia, Liz can usually be found anywhere outside.